Our personal injury lawyers have a question and answer session with League of American Bicyclists “League Certified Instructor” and previous Education Director of the New York Bicycling Coalition, Ken Crandall. #8

What are some hand signals that drivers should look for?

Ken:
I mean, they’re fairly standard, the one thing that when I talk about hand signals is, where we’ve really been discouraging the old left-handed right turn signal, where you bend your left arm at 90 degrees, because I can’t tell you how many times I’ve used that and somebody on the sidewalk waves at me, because they think I’m saying hi! We just recommend people stick out their right arm, just in the same way they would indicate a left turn with their left arm, they do the same thing with their right arm. But other than that, the thing I would say about signals is it’s not always possible for a cyclist to maintain control of their vehicle and signal their turn at the same time. Sometimes you have to have both hands on the handlebars because you’re operating the brakes, you’re coming down a steep hill with a red light and a turn at the bottom, you’re probably not going to want to take your hands off the handlebars to signal that you’re turning right at the bottom of the hill because you have to stop, that kind of thing. So recognizing that yeah, signals are great, but cyclists aren’t always able and so it’s another reason to give lots of space.
It’s another reason to just, if you’re not sure what a cyclist is doing, slow down and wait for them to figure it out.
Unfortunately, we don’t have bicycle education in this country anymore, it’s mandated in New York, but it’s not enforced. People that are out there riding bikes are out there riding without any benefit of formal education. Whereas you behind the wheel of the car supposedly are trained and have demonstrated competency, so, again, there’s that weight of responsibility. 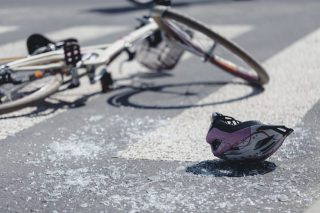