Our personal injury lawyers have a question and answer session with League of American Bicyclists “League Certified Instructor” and previous Education Director of the New York Bicycling Coalition, Ken Crandall. #7

Can you give me a little background on the video with the bottle being thrown?

Ken:
Yes, there is something I would like motorists to know. I have a tendency to use the traffic lane a lot more than a lot of other cyclists do. There are a lot of reasons for that. There’s unseen obstacles that a lot of motorists don’t see, the thing that sparked this video, they were aggressive with me because I was in a lane that is for all vehicles, not just motor vehicles. There are two lanes of available for motor traffic, they could have very well just gone to the other lane. But I was out in the center of the right lane because there’s a whole series of potholes and debris and even exposed cobblestone, and I’m not going to ride through it, I refuse to, because if I ride on that and I get a sudden flat in my front wheel and I’m all the way up against the curb and I fall over now I’m falling in a position where I may be immediately next to a car or truck, as opposed to, if I’m in the center of the lane, they have to either change lane or wait behind me. Now I’m in full visibility, they’re not squeezing up against me, I can maneuver around debris the motorist probably wouldn’t even see, and I have space to fall, I need space to fall. 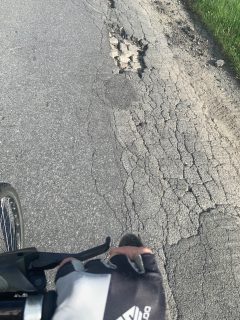 I haven’t even touched on the door zone, a lot of bike lanes, especially around here are designed so that there’s parked cars right along the side of them and you get doors opened in front of you all the time. So if you ride in the bike lane, you’re very at risk of getting doored And if you get doored, it’s very easy to get knocked into traffic and run over. Getting doored is not just an inconvenience.

So, understanding that just because a bike lane is there doesn’t mean, and that’s one of the areas where New York state law kind of falls short because if there is a bike lane, you’re required to be in it, but they do have caveats for safety. Unfortunately the wording in of the statutes in NY is very vague and almost entirely open to interpretation.